by or2az
A not-very-serious-slightly-laughable attempt at using the often worthless Google translate to find out the names of the characters, even the goofy ones, in Onsen Mahjong.
Feel free to correct anything you like!

I wonder how many out of 14 were correct.

by Barticle
The girls' names are written using the simpler Hiragana or Katakana characters which can be read unambiguously as sounds, e.g. A-ki-ho.

An auto-translator will fail if it tries to interpret the spelling as a word instead of a name. The third one should just be Naru-Naru.

For the fishy one... 尾 means "tail" and 頭 means "head" (or a pair in Japanese mahjong). 尾頭付き is a fish served whole. タイ means "sea bream" but phonetically it's like "tie".

Yup, 酒 just means "sake" or "alcohol" - not sure how your auto-trans missed that. That's a traditional sake bottle too.

おかみ is Okami which means "landlady". One word for "wolf" is おおかみ (Ōkami) which is also the title of a video-game (and a pun there on "great god").

Here's a quick article about the egg dish: https://en.wikipedia.org/wiki/Onsen_tamago

by Shirluban
よんちゃん is Yon-chan. I've no idea how you get Heiyo-chan.
Hikari means light (like sun light).
I doubt the 6 girls names are supposed to have a meaning.

I think you go the others right. 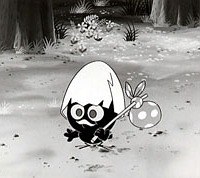 by or2az
Tying up loose ends:

Somehow, it translated 平よゃん, which has 3 of the same characters. Didn't notice at the time. Tried again, came up with Yanchan, Yo chan, and Yoko.

Aha, live and learn!
Calimero is an Italian/Japanese animated cartoon about a charming, but hapless anthropomorphized chicken; the only black one in a family of yellow chickens. He wears half of his egg shell still on his head.
Anthropomorphized: ascribing human features to something.

How is this related?
Manjū is a popular traditional Japanese confection. There are many varieties of manjū, but most have an outside made from flour, rice powder and buckwheat and a filling of anko, made from boiled azuki beans and sugar.
edit: ok, figured it out, I think. Manju is the Steamed Bun character that I thought was some kind of vegetable.

Have to remember the next time I make it to a hot spring to bring along a couple of eggs.

by Ignatius
Oh, I'm late to the party...

Ōkami was an excelent game for PS2, and Wii. PS3 had an HD version remaster. You can find the game just as Okami. Is one one of the 2 games that Studio Clover, a mini studio of Capcom, made.

The other game was God Hand. A really lame looking game with a bit weird control for a beat'em up. It was not so lame, but actually had serious clipping that seemed even intended. The story was stupid, fun, absurd and full of clichés.

The game was really hard even on easy, fighting two enemies at once was sure death. It had a very customizable combat system which was pretty cool.

It had some good ideas, and some bad ones. It was the kind of game you needed to think thoroughly if you really wanted to buy. It was not for everyone. You can buy for PS3 as a PS2 classic (no remaster). It was a controller destroyer game (not as much as Devil May Cry, but close).

By the way, Okami is also a cult game. It was literally awesome, visually stunning, incredible music, great controls, fun to play, good story... But as PS2 lacked some potency, it had a noticeable popping, you know, when things just emerge instanty in a 2 meter radius, and you can see them just because... The game was full of japanese folklore, the more you knew about the old legends and stories, the more you would be able to enjoy it.

If you never have seen the game in action, do yourself a favor and look for it (I would recommend two dreamcast games to look for videos too, Jet Set Radio and Power Stone 2)...

By the way, I watched Calimero when I was a kid.

I always thought the egg looked like a boiled egg ゆで卵/yude tamago, and writing 湯たま/yutama was a pun on the fact it was an boiled egg in an onsen, and about the concept of onsen egg...

by Barticle
Since it has relatively few different sounds (syllables), the Japanese language has very many homophones (words which sound the same) that have completely different meanings even without adding any extra characters (to their Kana or English spellings). This gives excellent potential for puns, for example 狼 (Ōkami = wolf) vs 大神 (Ō Kami = great god).

The Ōkami game had a lovely concept and charming cel-shaded artwork - your primary task was to restore colour to the world, depicted in the style of traditional Japanese sumi-e (ink wash) paintings. I played it on PS2 but I guess on the Wii you would have the benefit of motion controls to make the various symbols with your character's magic brush.

by Ignatius
Cool. That's a great game, and now people on PC will be able to play it.
All times are UTC
Page 1 of 1
Powered by phpBB® Forum Software © phpBB Limited
https://www.phpbb.com/