Mini-Review of Mahjong from A to Zhú

Mini-Review of Mahjong from A to Zhú

Just before going away on vacation I received my copy of Mahjong from A to Zhú by our very own Scott D. Miller. I had heard a bit about it from Jenn Barr either on a blog post or on the Jong Cast (I can't remember which), but when Scott started to show up online in various Mahjong fora, he seemed genuinely nice and I figured I should support good people and buy the book. I'm not at all disappointed! The book reads a bit like a family tree of Mahjong - starting with the core of Mahjong set formation and ending with the core hand shapes and scoring patterns -- the meat of the book goes into a wide variety of Mahjong rule sets. From the classical Classical Chinese to Korean to Modern Chinese to Western and, of course, Japanese Riichi. Tons of sub-variations are covered as well and lots of local variants are described. Add Mahjong games like Zung Jung and Xiamen and you've got explanations on a wealth of Mahjong variants from around the globe. I paid special attention to the front and back material (common to many games) and the Japanese Riichi descriptions which cover roughly 21 pages of rules. Both classical Japanese rules and the more modern Riichi rules are described along with the rules from the EMA and the JPML. Everything seemed in order - no glaring omissions or problems that I could detect - the section was well edited. I was surprised at three things in this section: the Head Bump rule as being standard (which it may well be - I've always played that double-Ron is allowed and triple-Ron is an abortive draw), the two dragon Pon / third dragon pair as a Yaku scoring 4/4 (I'd not seen that mentioned in other books I've read), and finally the scoring tables which started at fan=3 (I realize Scott they did it to match up with the scoring calculation that was explained, but it's not customary for me to see the scoring tables laid out in that way). All told, this was an excellent treaty of Riichi.

The other rule sets I glanced over. They all looked comprehensive and I'm excited to dig into them on a leisurely basis. To not duplicate lots of scoring patterns, all the common scoring patterns are in the back of the book. So Scott only needs to say something like, "Pure Outside Hand" and gives you a section number to reference what that hands consists of. This allows the bulk of the book (218 pages) to really pack in the rule sets and variants.

There are a few pages dedicated to other things you can do with Mahjong tiles - including a brief section on Divination. Those additions were a nice touch - though probably outside the scope for most readers.

Considering the street price (I got mine for under US$15 shipped), I can highly recommend the book. While it wouldn't be a perfect introduction book to the game, it's highly valuable for the wealth of variations and rule-sets for those who have some experience with the basics. There aren't all that many good Mahjong books in English but this is definitely one of them!

I'm glad you enjoyed it! It was a labor of love over many years, so it's nice to see people enjoying it. And thanks for the shout out!

I wonder if someone (reader or author!) could please post a brief summary of the concept and origin of "Meow Meow"?

(I know mahjong players often favour long late-night sessions but I trust it's unrelated to the designer drug of the same name!)
Top

Barticle wrote:I wonder if someone (reader or author!) could please post a brief summary of the concept and origin of "Meow Meow"?

(I know mahjong players often favour long late-night sessions but I trust it's unrelated to the designer drug of the same name!)

Ha! Not to resurrect an old thread from the dead, but somehow I missed this question way back when, and I just now came across it looking for something else.

What is Meow Meow Mahjong?!?

It's hands down the most popular game on our block for the kids crowd, which the adults enjoy too as a "gate-way drug" to mahjong. My son loves it so much when we asked him what theme he wanted for his 5th birthday party, his first pick was "Meow Meow Mahjong!"

As to its origins, you're close.... but it's name doesn't come from any mind-altering pharmokinetics, it's name comes from the mind-altering card game Mau-Mau, the same game that inspired Uno, and Crazy Eights.

Meow Meow is an adaptation of Mau Mau for use with mahjong tiles. Its fun and easy to learn, so yes, it is the gate-way drug to mahjong. Especially at a party or other adult gathering, no adult is going to want to sit out the party to listen and learn all the complexity of mahjong... but in 60 seconds they can learn Meow Meow mahjong, and now they are playing with your mahjong set. Now they are hooked, and when the party is over, you can invite them over another time to learn how to play the real game of mahjong, and usually they'll be jonesing for another fix of those crazy tiles.

Many thanks for the explanation - it was worth the wait!

All this time I'd interpreted your silence as a polite suggestion to seek my answer by purchasing your opus from an authorised dealer.

PS Naturally I'm disappointed to have my long-standing preconceptions shattered. 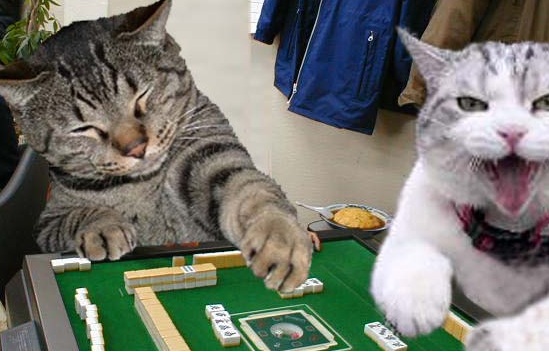